DONATE TO SUPPORT THIS SEASON 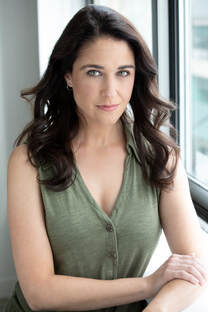 Mairi couldn't be more excited to be back with BASH'd for this epic show! Some of her favourite past shows include: Cymbeline (Shakespeare BASH'd), War Horse (Mirvish/North America/Tokyo), The Great Divide (Harold Green), Spider's Web (Aquarius), The Tempest (RMTC), Brief Encounter (VP/RMTC), A Midsummer Night's Dream (Bard on the Beach), The Rocky Horror Show (RMTC/CanStage), As You Like It (Dream in High Park), Guys and Dolls (RMTC/Citadel/TC), Space Opera Zero and Requiem for a Gumshoe (Eldritch), The Sound Of Music (Rainbow Stage), The Gift of the Magi (Orangeville), Baskerville (Lighthouse). Directing credits include: Two Weird Tales (Eldritch), february - a love story (Sudden Spark), Early August (Lighthouse), Diminished (Trafalgar 24/Driftwood). Mairi has also appeared in Run The Burbs, Good Witch, Take Note, and What We Do In The Shadows. 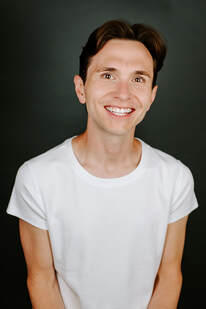 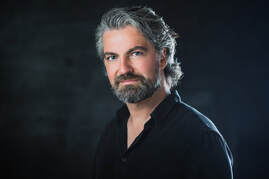 Daniel is an Associate Artistic Director of Shakespeare BASH'd. His work has been seen at the Citadel Theatre in Edmonton, Royal Manitoba Theatre Centre in Winnipeg, Watermark Theatre in PEI, over 3 seasons at the Stratford Festival, and he has performed Shakespeare in parks and bars all over.  For Shakespeare BASH’d, he has played Iachomo in Cymbeline, Duke Senior/Ferdinand in As You Like It, Sir Toby Belch in Twelfth Night, and Polonius in Hamlet.  Daniel has played clarinet, ukelele, piano, organ, drums, guitar, and conducted a choir in shows he has also acted in, and is currently writing and curating music for an action packed mini-series with ActionCAN Films called Brawlstars. 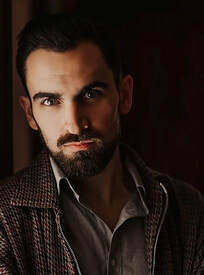 Tristan is thrilled to be a part of this amazing team and getting the opportunity to work with BASH'd for a second time. Tristan earned his MA in Classical Acting form the London Academy of Music and Dramatic Art (LAMDA) in the U.K. He recently received two DORA nominations for both outstanding production and ensemble performance for his role as Micheal Schwerner in the world premier of Three Ordinary Men with Cahoots Theatre this summer.   Recent credits include: Micheal schwerner: Three Ordinary Men (Cahoots Theatre) Gerald Harvey: Taking Liberties (TL Collective);  Jeff: The Rear Window (Bygone Theatre) Broadway World Award - Outstanding Performance; Hamlet: Hamlet(s) (Skipping Stones Theatre); Ferdinand: The Dutchess of Malfi (Shakespeare Bash'd); Rowan: Living With Olivia (RedWit Theatre). 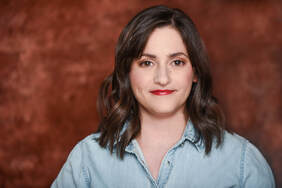 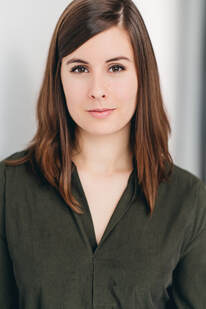 ​Bailey (she/her) is a fight and intimacy choreographer and actor originally from Montreal. She’s a bilingual, bisexual artist who trained as an Advanced Actor Combatant at Rapier Wit and completed intensive training in intimacy direction with Rachel Flesher. For Shakespeare BASH’d, Bailey has appeared as Pisanio in Cymbeline, Luciana in The Comedy of Errors, Arthur in King John, and in multiple staged readings. She associate directed the BASH’d productions of Cymbeline and As You Like It, and played Lavinia in Titus Andronicus directed by James Wallis (Hart House). Selected fight/intimacy choreography credits include Lucky (rEvolver Festival), Othello (University of Windsor), Cymbeline (Shakespeare BASH’d), Reasons to be Pretty (The, And Stage Company), News Play (Prairie Fire, Please), and what I call her (Crow’s Theatre). She is an alumna of Humber College, University of Toronto, Sheridan College, and John Abbott College. She currently works as a mental health and addictions counsellor at the Jean Tweed Centre. As a former BASH'd Resident Artist, Bailey is thrilled to join the Lear team. Special shout out to Julia and James for introducing her to the love of her life (容海峯). 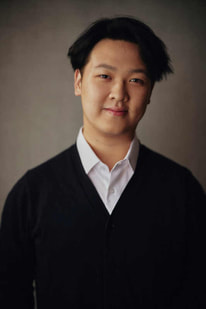 郝邦宇 Steven Hao is a Chinese-born Canadian actor, director, and theatre creator based in Tkaronto. Recently graduated from TMU's acting program, Steven spends his downtime continuously improving his work both on and offstage. Steven most recently took the Tarragon stage as the titular role of Cockroach in Jeff Ho's play Cockroach, where his character openly spoke about his hatred for King Lear. Beyond the play, however, Steven enjoys the mad king quite a bit (I know). This is his first time working with Shakespeare Bash'd beyond taking their classes, and he's very grateful for the opportunity and cannot contain his excitement.
His selected theatre credits include: Cockroach (Tarragon Theatre); Trojan Girls & Outhouse of Atreus (Factory Theatre); Three Sisters (The Howland Company); LoveSick or Love's Labour's Lost (Panoply Collective); Killing Time, Rebecca Love (Mixtape Projects). For directing: A Perfect Bowl of Pho, Nam Nguyen (Toronto Fringe Festival); I and You, Lauren Gunderson (Terra Firma Festival); Another Birthday at The Buffet (Hamilton Fringe); Constellations, Nick Payne (Precipice Productions). 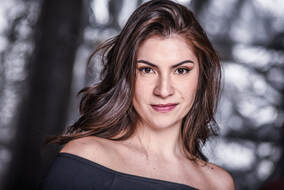 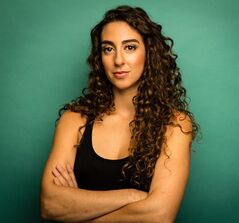 Melanie is a queer, mixed race actor, with a deep love for Shakespeare. After receiving her theatre training from the University of Victoria, she went on to become an alumnus of the Factory Theatre Mechanical program, as well as an FDC certified advanced stage combatant. With deep roots in Toronto, Mel has worked with several indie theatre companies across the city including Shakespeare BASH’d (Cymbeline, Othello, Measure for Measure), Dauntless City Theatre (All’s Well That Ends Well, Much Ado About Nothing) and North America (Flooded). Most recently she returned from Halifax where she made her debut with Shakespeare by the Sea (Cinderelly/ Hamlet). When she’s not performing, Mel enjoys pole dancing, rock climbing, eating pasta, and drinking whisky. 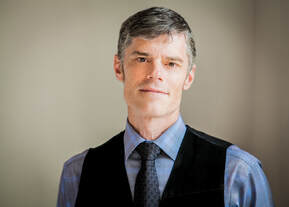 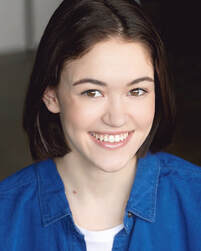 Kate has worked in Toronto's theatre community since graduating from Toronto Metropolitan University in 2018. She is a passionate arts educator, dramaturg, front-of-house manager, and actor. An acting highlight for Kate was being a part of the Dora-nominated ensemble for Young People's Theatre’s "A Million Billion Pieces." Next, she’ll be in an upcoming reading with Shakespeare BASH'd.
Kate’s mom remembers a young Kate calling home soon after moving to Toronto, excitedly telling her all about Shakespeare BASH'd after seeing a show. Kate is delighted that her mom can now see a BASH'd show Kate is involved in.
​ 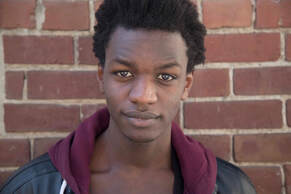 Though born in Toronto, Ngabo Nabea spent much of his childhood travelling and studying abroad, before returning to study performance at Ryerson University. Upon graduating, he has performed theatre across the country, including leads in Twisted at the Factory Theatre (2015), The Postman by Appledore Productions for the Pan Am Games (2015), The Number's Game at Storefront Theatre (2016), I and You at the Globe Theatre (2018), Fences at the Grand Theatre (2019) and Death and the King's Horseman at the Stratford Festival (2022). King Lear is his favorite Shakespeare play, and looks forward to bringing it to life with the wonderful artists at Shakespeare BASH'd.
Socials: @_nguapo 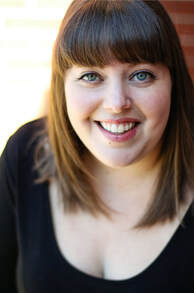 Julia is an actor, director, and producer, as well as a Co-Founder and Co-Artistic Director of Shakespeare BASH'd. For Shakespeare BASH'd, Julia has directed Cymbeline, Richard III, The Comedy of Errors, and The Duchess of Malfi (staged reading). She has also performed in many BASH'd productions, including A Midsummer Night's Dream, The Taming of the Shrew, Romeo & Juliet, Macbeth, The Merry Wives of Windsor, Hamlet, Twelfth Night, and Volpone (staged reading).
She was a member of the Michael Langham Workshop for Classical Directing in, acting as the Assistant Director on Private Lives and Associate Director on All's Well That Ends Well, and as co-facilitator of the WordPlay series in the Forum. In the Festival's 2021 season she was Co-Director and Co-Curator of Play On! A Shakespeare-Inspired Mix-Tape.
Selected Additional Credits: 3Tempests (Shakespeare In Action), The Tom & Gertie Letters Project (Co-Director), Modern Love (Co-Creator, Canadian Stage), and as an actor OVER, See Bob Run (Theatre Caravel), reasons to the pretty (The Labute Cycle), The Forest (Red One Theatre Collective), Dublin Carol (Fly on the Wall).​ Julia is a graduate of the joint acting program at UofT and Sheridan College. 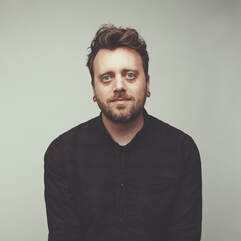 Matt Nish-Lapidus makes software, sounds, and texts probing the myth that computers need to be useful rather than beautiful. He holds a H.BFA in New Media from Toronto Metropolitan University and a Master of Visual Studies in Studio Art from The University of Toronto. Matt’s interests lie in the poetics of computation and its proclivity to create meaningful relations through iteration and recombination, as well as how computation can be a source of identity and resistance. His work results in diverse outputs including books, recordings, installations, performances, software, and objects. Matt has performed and exhibited at ACUD Macht Neu, Electric Eclectics, InterAccess, Mayhem Copenhagen, The Plumb, and many DIY spaces in North America and Europe. You can find Matt online and away-from-keyboard under various aliases and collaborations including emenel, New Tendencies, and <blink>. 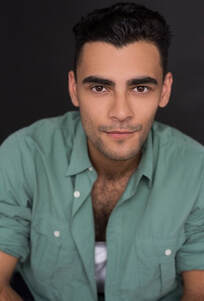 Deivan Steele (he/him) is a South African-Canadian actor, director, musician, and writer. His work has brought him to theatres like Tarragon, Neptune, Theatre Direct, Shakespeare by the Sea, Outside the March, Eastern Front, Driftwood, Shakespeare in Action, Bad Hats, Unwrap, Next Stage, Springworks, and Prague Shakespeare Co. The barroom spirit of Shakespeare BASH’d is a (sort of) return to his roots; his first paid acting gig at the age of 15 was in a blues bar and involved feeding donuts to a man doing push-ups. Also, he denies any association with Breanne Tice. 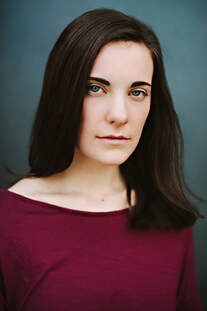 Breanne Tice (she/her) is a Mad actor and creator who has worked with companies including Theatre Direct, Eastern Front Theatre, Theatre by the Bay, Bard in the Park, and Theatre on the Ridge. She is the co-creator of The Assembly, an interactive theatre experience designed to strengthen our democracy and build long-term thinking. She also works as an artist educator at Soulpepper Theatre and Shakespeare in Action, and is training to become an intimacy director. Breanne disputes recent rumours that she and Deivan Steele are connected. 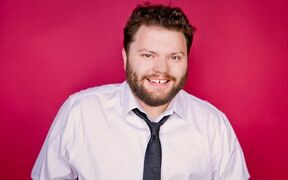 James has been a Shakespeare fan all his life, having performed with Resurgence Theatre Company as a teenager and again as a professional later in his career.
In 2010, James co-founded Shakespeare BASH’d with his wife, Julia. For the company, James has directed staged readings of Romeo and Juliet (2010), A Midsummer Night’s Dream (2011), Edward II (2015), Volpone (2017), as well as the full productions of Romeo & Juliet, Love's Labour's Lost, Macbeth, The Merry Wives of Windsor, and Twelfth Night, Othello, and A Midsummer Night's Dream. He played Petruchio in the company's Best of Fringe winning production of The Taming of the Shrew in 2012 and the remount in 2015, and played Benedick in their sold-out production of Much Ado About Nothing in the 2013 Toronto Fringe. James participated in the Michael Langham Workshop for Classical Directing  at the Stratford Festival, assistant directing Macbeth, Bunny, and Romeo and Juliet, as well as Julius Caesar in 2018. He returned to Stratford in 2021 as Co-Director and Co-Curator of Play On! A Shakespeare-Inspired Mix-Tape. 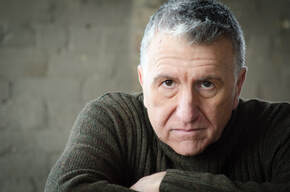 Scott Wentworth is a Tony- and Olivier-nominated theatre artist whose work has been celebrated on Broadway, in London’s West End, and in theatres across the U.S. and Canada. In his 26 seasons at the Stratford Festival, he has appeared as Tranio in Richard Monette’s landmark production of The Taming of the Shrew, Antony in Julius Caesar opposite Colm Feore, Nicholas Pennell and Brian Bedford, Iago in Mr. Bedford’s production of Othello, Hubert in Robin Phillips’ King John, the title role in Macbeth opposite Seana McKenna, and Bosola in Peter Hinton’s The Duchess of Malfi. Recent favourites include Shylock in Antoni Cimolino’s production of The Merchant of Venice, the title role in Carey Perloff’s John Gabriel Borkman, and James Tyrone in Long Day’s Journey Into Night directed by Miles Potter. Directing credits include Henry IV Parts I and II, Pericles, Romeo and Juliet, Julius Caesar, All’s Well That Ends Well (Stratford), Richard III (Bard On The Beach), The Winter’s Tale, Henry V, As You Like It, Othello, Much Ado About Nothing (Shakespeare Theatre of New Jersey), and Love’s Labour’s Lost (Shakespeare Santa Cruz). 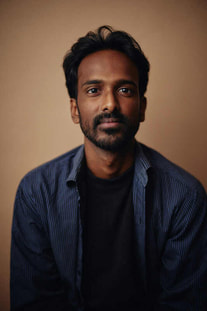 Ben Yoganathan is an actor, writer and art maker born in Sri Lanka and now based out of Toronto. He recently graduated from Toronto Metropolitan University’s (formerly Ryerson) Performance: Acting program. He is thrilled to be working on his first Shakespeare Bash’d show!
​
Recent credits include: Hal/Henry V in King Henry Five (Driftwood Theatre), Andrei in Three Sisters (The Howland Company), Todd Tweedie in Killing Time (Mixtape Projects)
DONATE TO SUPPORT THIS SEASON
Proudly powered by Weebly