Click Here to buy your Tickets to Twelfth Night
We asked Hallie Seline, who plays Olivia in our production of Twelfth Night, a few questions about herself, the play, and her romantic history... 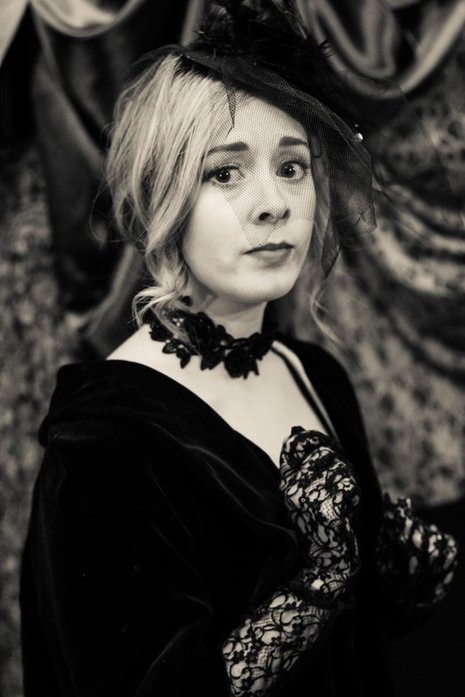 Hallie Seline as Olivia in TWELFTH NIGHT. Photo by Kyle Purcell.
What part of the city do you live in, and what is the best thing about your neighbourhood?
I feel like I live in between so many really lovely neighbourhoods: Bloorcourt, Little Italy, Ossington... which I love because I am surrounded by so many incredible places to eat, drink and be merry...whether it's to go see live music, to play bocce ball, or go see some Shakespeare at The Monarch Tavern... It's all there!

What is your favourite scene or line in Twelfth Night?
"I was adored once too." - Sir Andrew. He's 100% one of my favourites of Shakespeare's characters.

Have you ever written or received a love letter?
I feel like I can more accurately say that I have received a "love" mix-cd. I think that was my equivalent when growing up. In terms of love letters, it was really big to do that fancy fold-y thing that you could pull the tab to open it up and then inside it pretty much just said "Do you like me? Circle: Yes, No, Maybe." I'll take the broody mix-cd.

Who was your first kiss?
It's more like, where was my first kiss...: At a Much Music Video Dance during Eminem's The Way I Am... because #Romance.

This production is set in the 1920s in Paris. What is your favourite thing about that era?
Ah, so much! The music. "The Lost Generation" of artists like Ernest Hemingway, F. Scott Fitzgerald, Picasso. The fashion.

What are you going to drink to celebrate opening night at the Monarch Tavern?
Bulleit Bourbon on the rocks.