Click Here to buy your Tickets to Richard iii
We asked Jade Douris, who plays Brackenbury, Rivers, and Young York in our production of Richard III, a few questions about herself,
​the play, and her family... 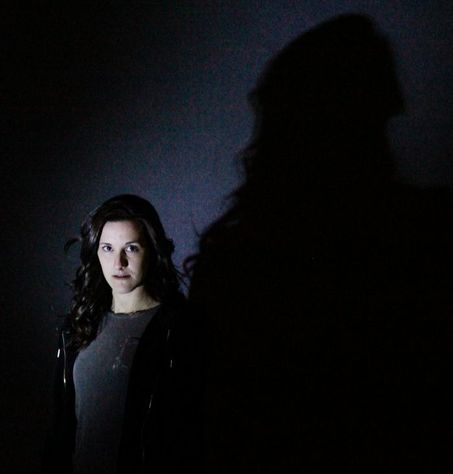 Jade Douris in RICHARD III. Photo by Kyle Purcell.
How many characters do you play in Richard III?
I play four different characters. In this super dark and emotional play, It can be really fun to play Young York, because you get to come in and ignore all that stuff and just live the bright, sunshiney life of a little kid for a few minutes. A little respite from the turmoil. All the other characters are worried about protecting themselves and their families and Young York is actually just super worried about whether his brother is taller than him or not.

What neighbourhood of Toronto do you live in?
Parkdale and I love it. It has such a lovely, creative, friendly neighbourhood vibe. And the food. the FOOD.

If you were a character in Richard III, which act of the play would you survive until and how?
Act 3. I'm such a Rivers. I'd stick to my guns and go out in a blaze of glory.

Family politics are at the very centre of Richard III. Where are you in the birth order in your family?
Sometimes people meet me and ask, unprompted, "are you, by any chance, a first-born?". I have leadership qualities. And yes, three younger siblings. It's Levi-O-sa, not Levio-SA!

William and Kate or Harry and Meghan?
Can't decide, I am obsessed with with both Kate and Meghan. I don't know if it's just good PR, but I want to be best friends with them. They're perfect. My fiance and I just got engagement photos done, and his sister told me I looked like Kate Middleton in them and I was so flattered I couldn't think of anything to say. Then, his Aunt Gail was like, "I love these photos, they're better than Harry and Meghan's!" (which had just been released at the time), and I was like, "Thanks, Aunt Gail, but that's literally impossible."

Who’s the sneakiest person in the cast?
For sure Jenn Dzialoszynski. That lady has got mischief up her sleeve at all times. So shifty.

What are you most excited for people to see in this production?
​JAMES WALLIS AS RICHARD. Obsessed. It's gonna be so good, y'all.