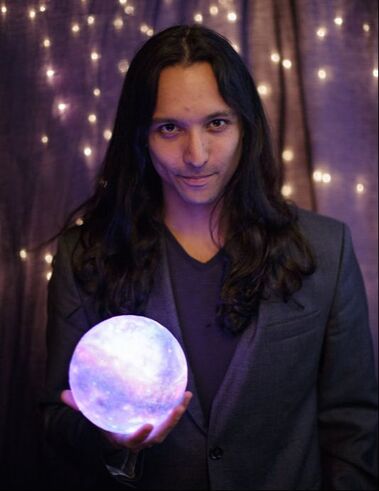 Nicholas Nahwegahbow as Theseus. Photo by Kyle Purcell.
Have you been in a production of A Midsummer Night's Dream before?
I have! Strangely enough The Dream was the first play I’ve ever done, I played the Young Indian prince with no lines being fought over by Oberon and Titania when I was in grade two or three.

What might people be interested to know about your take on your character?
Theseus, was quite the epic hero in Greek mythology, waging wars and battling minotaurs. I’ve been discovering that he’s very much a man of the moment, when the war is won, what else is there but to celebrate life?

If you were transformed into an animal, what would it be?
I’d transform into a beloved household pet, like a dog or a cat.

What’s the best line in the play?
“The course of truth love never did run smooth.” If you really fall for someone, you’re in for a whirlwind. Especially when you're young.

Who is your favourite pop-culture fairy?
Gotta go with Queen Mab.

If you could have one magical power what would it be?
I’d like to fly, transit in this city can be horribly unreliable.

What is your post-show drink of choice?
A tall beer and a shot of whiskey, writer’s tears is a favourite.

What are you most excited for people to see in this production?
I’m excited for people to hear and see our take on the magic. Hilary has made a wonderful soundtrack, and the haunting/enticing element I think will serve well with a glass of wine or a beer in hand.
Proudly powered by Weebly