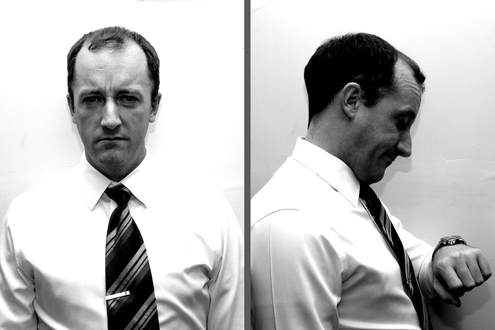 David Ross as Duke Vincentio. Photo by Kyle Purcell.
Have you been in a production of Measure for Measure before?
In 2005 I saw my first production of this show in my favourite theatre. It was a game changer for me. Reviews can’t do justice to a live performance, in the same way reading Shakespeare can’t stack up to speaking Shakespeare, but here’s a review of that performance.
Oh ... you asked, “Have I ever been in a performance of ...”  No, no I haven’t. This is my first.
​
What neighbourhood of Toronto do you live in?
After 9 years at Bloor & Dufferin, I moved all the way to Bloor & Bathurst because I wanted more access to Honest Ed’s crazy deals ... uummmm ...

What’s the best line in the play?
My favourite line in the play is one of Lucio’s. Michael’s delivery of Shakespeare’s comic insight made it one of the first I ever heard before I read. If you know me, you know how big a deal that is.  Of Angelo: “sparrows must not build in his house-eaves, because they are lecherous.”

Measure for Measure is being performed at a music venue. If you were in a band, what kind of band would it be?
I think I would be a great addition to the Soggy Bottom Boys.  Guys, look me up when you’re in town. Come to 3 Speed and we’ll sing a set.

If your character were at Junction City Music Hall, what drink would they order?
The Duke would sip a cognac. The Friar prefers a glass of Merlot. Dave enjoys a neat whiskey.

What are you most excited for people to see in this production?
Of all the Shakespeare BASH’d productions I’ve been in, none has seemed so relevant to the surrounding social climate as this one.

Coffee or Tea?
If I don’t have a bodum of coffee in the morning, I get confused.
Proudly powered by Weebly