Click here to buy your tickets to Othello
We asked Melanie Leon, who plays Montana in our production of Othello, a few questions about herself, the play, and her drink preferences... 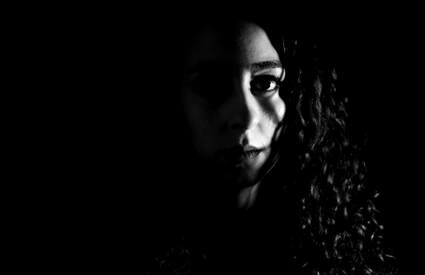 Melanie Leon as Montana. Photo by Jonas Widdifield.
What might people be interested to know about your take on your character?
My character, Montana, is supposed to be a man (shocker, I know), and navigating how to be a woman in a high status role, particularly as an officer has been interesting.

What neighbourhood of Toronto do you live in?
St Clair and Oakwood. Futura gelato is a revelation. And of course Emma's Country Kitchen.

What’s the best line in the play?
There are so many GREAT lines in this play. One of my favourites, though,  is spoken by Cassio about drinking:
"O God, that men should put an enemy in their mouths to steal away their brains; that we should, with joy, pleasance revel and applause, transform ourselves into beasts!"

Everyone refers to Iago as 'honest.' What attribute do people sometimes falsely give to you?
As a pole dancer and someone who is frequently advocating for sex positivity, I've had my fair share of people calling me various versions of "strumpet" at several points in my life.  In the end, haters gonna hate.

What is your post-show drink of choice?
WHISKY

What are you most excited for people to see in this production?
It takes guts to do a play like this, so I'm excited for audiences to see all these brave and talented humans.
Proudly powered by Weebly