Click Here to buy your Tickets to Richard iii
We asked Jennifer Dzialoszynski, who plays Anne, the Lord Mayor, and more in our production of Richard III, a few questions about herself, her family, the play, and her name... 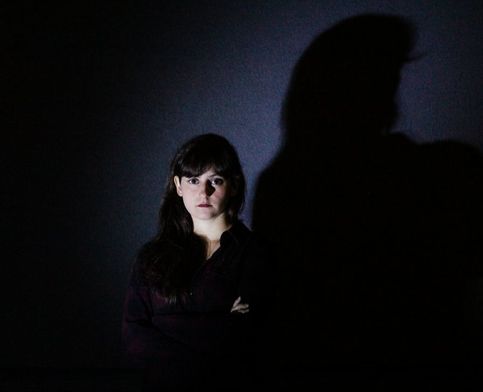 Jennifer Dzialoszynski in RICHARD III. Photo by Kyle Purcell.
How many characters do you play in Richard III? Which is your favourite?
I play 4 parts, technically 5, but the fifth is kind of a mystery soldier-ish person who doesn't speak, so let's stick with 4 roles.  They are: Lady Anne, Messenger, Citizen, and the Lord Mayor.  As for a favourite; digging into the language of Anne has been a real treat for me.  I think it's such a challenging role to do, and I've really loved working on it.  That said, I also have a soft spot for the Lord Mayor.

Family politics are at the very centre of Richard III. Where are you in the birth order in your family?
I am the middle child in my family.  But I am most often mistaken for being an only child, and I never quite know how to take this.  I'm hoping it's because I'm able to amuse myself when bored... but I don't know.  Reading up on 'middle child syndrome' I can decidedly say that I am not the classic middle child; I don't suffer from feelings of neglect or jealousy.  I kinda like being in the middle actually, I can look forward to see what to do/not to do, and look back to impart (hopefully) wisdom.  It's like being the glue that holds us all together.

Tell us about your history with Shakespeare BASH'd.
This is my second on-stage appearance in a Shakespeare Bash'd production.  My first was in Hamlet in 2016 as Laertes, which was a lot of fun!  I think the biggest difference to note between the two productions is the staging.  The whole cast of Richard III remains on stage for the whole show, which necessitates some creative thinking from our fearless leader Julia Nish-Lapidus, and a specific kind of focus for the cast.  We've had to focus on movement choices to differentiate characters, sometimes in place of costume changes, and the costume pieces we have are sparse so really creating a different body for each character is a big part of our story telling.  The ability to immediately pick up and drop a character is also key for us this time around, as there is no off-stage preparation possible.

Richard chooses to keep his real name when he becomes king (typical). Pick your Regnal name!
I have to respect Richard for keeping his name.  I recently watched a documentary series about the Windsors, and it's so strange to me to hear King Edward VIII referred to as someone's uncle David.  The name changing is ridiculous to me.  I would definitely keep my name, and insist that my last name be included in my royal title so that the nation learn to properly pronounce Dzialoszynski.
Proudly powered by Weebly