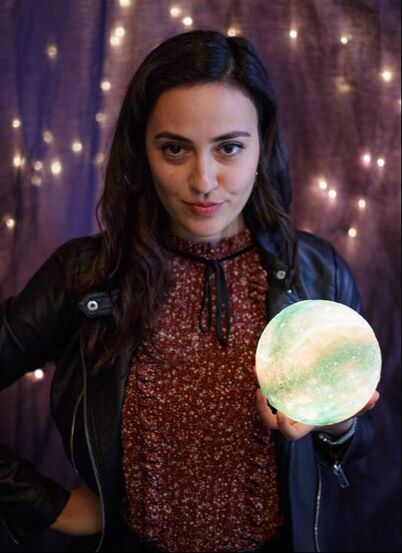 Nyiri Karakas as Helena. Photo by Kyle Purcell.
If you were transformed into an animal, what would it be?
A lemur, 100%. They have the most dead-pan faces, and remain the most chilled-out creatures. I was a lemur in my animal studies class in drama school, and it’s a part of my genetic makeup now.

What’s the best line in the play?
As artists, we are no strangers to the night, and to the creativity that is borne in this magical time of day, as such, the best lines from the play are:
Now it is the time of night
That the graves all gaping wide,
Every one lets forth his sprite,
In the church-way paths to glide

If you were in "The Most Lamentable Comedy and Most Cruel Death of Pyramus and Thisbe" which character would you play?
The wall.

If your character were at the Monarch Tavern, what drink would they order?
A love potion.

Who is your favourite pop-culture fairy?
Puck.

If you could have one magical power what would it be?
The ability to conjure a Patronus charm. I’m still working on it.
​
What is your post-show drink of choice?
Gin and Tonic, of course.

What is your history with Shakespeare BASH'd? What's unique about working on this production?
I have always, since my journey began, wanted to be in a production with Shakespeare BASH’d, and it is an honour to work in the presence of such talented and giving artists. We are doing our best to discover this play on our own, rather than relying on our prior knowledge about what it is, or what it should be.
Proudly powered by Weebly