Click here to buy your tickets to Cymbeline
We asked Jesse Nerenberg, who plays Posthumus in our production of Cymbeline, a few questions about himself, his character, and his favourite fairy tales... 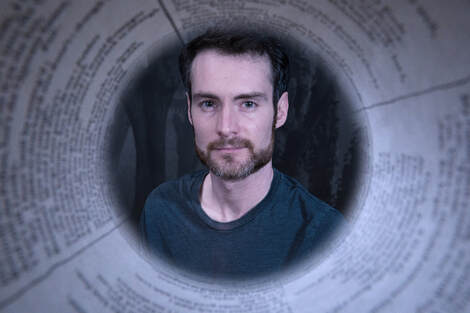 Jesse Nerenberg as Posthumus. Photo by Kyle Purcell.
​What might people be interested to know about your take on your character?
I’m interested to see how people react to Posthumus’ actions. Modern sensibility will not look kindly on his reaction to his wife’s presumed infidelity, and I’m still trying to discover my portal into this. Also while writing this answer I’ve noticed that my character’s name contains the word “Humus” and I can’t unsee this. I’m concerned.

What's your favourite fairy tale?
As I child I really liked Rumpelstiltskin, because it’s mysterious and creepy and I loved the Rumpelstiltskin episode of this very odd show I watched on PBS called Faerie Tale Theatre, It was from the 80s and hosted by Shelly Duvall and involved Hollywood celebrities in versions of classic fairy tales. Unmissable episodes included Robin Williams as the Frog Prince, Malcolm McDowell as the Big Bad Wolf to Mary Steenburgen’s Little Red Riding Hood, Carrie Fisher as Thumbelina, James Earl Jones as the Genie with Leonard Nimoy as the Evil Magician in Aladdin, Jeff Goldblum as the Wolf in the Three Little Pigs and Harry Dean Stanton as Rip Van Winkle. That show was the weirdest, strangest, most wonderful program and if the only thing I achieve with this interview is to make people look it up, I’ll consider it a success.

If you were running away into the woods, who would you take with you and why?
I don’t think I’d run away to the woods. But as a child I loved this cooperative board game called Granny’s House that was all about getting to your Grandmother’s house through the woods. Bears were involved, and there was a picture of a huge pie on her windowsill. Good times.
​
Cymbeline is often classified as a romance. Are you a romantic?
I honestly believe that pretty much anybody who wants to do theatre has at least a touch of the romantic in them. I’m no exception. And grand gestures are overrated. Love is about the small things. The most romantic line from any movie is when Billy Crystal tells Meg Ryan “I love that you get a little crinkle above your nose when you’re looking at me like I’m nuts.” Small stuff. (As an aside, Billy Crystal also appears in the Three Little Pigs adaptation with Jeff Goldblum I mentioned earlier. In case anybody needed a further nudge to look it up.)

What’s the best line in the play?
I dunno about best, but of my lines, I like “Must I repent? I cannot do it better than in gyves, desired more than constrain’d.”

If your character were at Junction City Music Hall, what drink would they order?
Posthumus would look the bartender straight in the eye and say “Barkeep, a cup of your strongest Scotch Whiskey.” And after a moment of thought add, “And a side order of humus.”

What is your post-show drink of choice?
Depends on how I’m feeling. It could be water, could be whiskey, could be beer.
​
What is your history with Shakespeare BASH'd?
I think at this point I’m a certifiable BASH’d veteran, old vintage. I first played with BASH’d as Don John in the 2013 Fringe at a bar in a building that no longer exits. Since then, I’ve been in Love’s Labour’s Lost, Macbeth, Hamlet, Twelfth Night and the staged reading of The Duchess of Malfi. What’s unique about Cymbeline is that it’s a play I’ve never done before, and in a space that’s new to me as a performer.
Proudly powered by Weebly