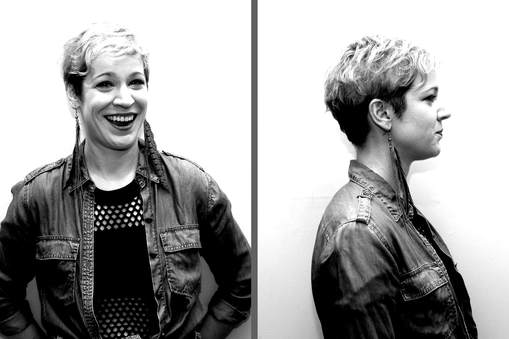 Lesley Robertson as Pompey. Photo by Kyle Purcell.
What might people be interested to know about your take on your character?
As I get older and continue to live in an area of Toronto with quite a few shelters and homeless people on the streets, I've been thinking more about Torontonians' struggles with poverty and mental health.  I'm inspired by people who fight through the struggle of life everyday and still manage to be cheerful and crack jokes.  Certainly my love of comedy and sense of humour help me battle my own hardships, but I'm also a very privileged and lucky person.  Pompey serves to expose the injustices of the world while simultaneously offering some brightness and cheer through her wit.  She is part of the "have-nots" of the world but she is clever, complicated, and resilient in a way that inspires me personally.

What’s the best line in the play?
Without a doubt - "Groping for trouts in a peculiar river." Just...SUCH an evocative image! OOH wait, but ALSO: "He is coming, sir, he is coming; I hear his straw rustle." (These are, of course, both Pompey's lines because I'm very self-absorbed).

Measure for Measure is being performed at a music venue. If you were in a band, what kind of band would it be?
I AM in a band.  A comedy band.  And we're called The Diddlin' Bibbles.  We're a polyamorous, spiritual folk duo from Widdlwack.  Follow us on instagram @thediddlinbibbles.

What's your take on prunes? Yes? No?
DISGUSTING!  Although I can't remember ever trying one...but I feel like their only purpose is to stay "regular" and I feel like there's other ways.  And now i'm talking about pooing in an interview...

Which character from Measure for Measure would you want to be friends with in real life?
Pompey.  And probably only Pompey, honestly!  I like how sassy Lucio is, so I'd go out drinking with him, but I don't trust him.
​
Favourite pop culture nun:
All of these questions are so easy: Whoopi Goldberg in Sister Act.

What are you most excited for people to see in this production?
Sochi Fried's performance as Isabella.  Sochi is one of my favourite actresses and Isabella's story feels very relevant right now.  The whole play feels relevant to me actually, and lots of people don't know the play very well so it's a fresher feeling Shakespeare play.  I hope people come and enjoy us working through this "problem play"!
Proudly powered by Weebly