CLICK HERE TO BUY YOUR TICKETS TO HAMLET
We asked Darcy Haywood Stoop, who is the Stage Manager of our production of Hamlet, a few questions about himself, the play, Shakespeare, and the city of Toronto... 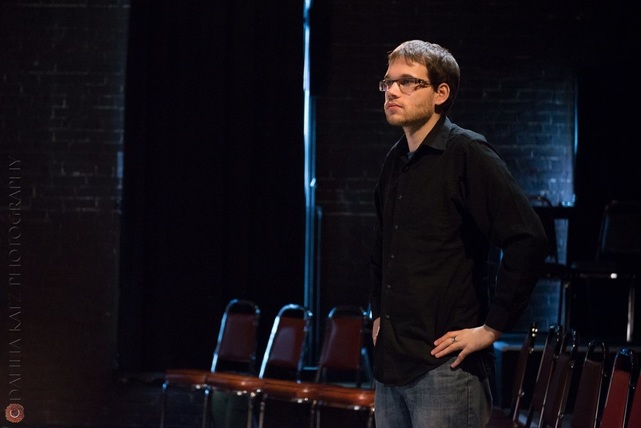 Darcy Haywood Stoop is the Stage Manager of HAMLET. Photo by Dahlia Katz.
What neighbourhood of the city do you live in, and in your opinion, what’s the best coffee shop or bar in your neighbourhood?
I live in Humewood/Cedarvale. Dave's... is my favourite spot for a brew.

What is your favourite Shakespeare play?
I have a special attachment to Twelfth Night as it was my very first show (I played Malvolio when I was 14). Since then I've grown to love Hamlet and King Lear with special ferocity.

What’s your favourite line in Hamlet?
Your worm is your only emperor for diet: we fat all creatures else to fat us, and we fat ourselves for maggots: your fat king and your lean beggar is but variable service, two dishes, but to one table.

What's your favorite thing about doing this play at the Monarch Tavern?
The intimacy of the space. Having the action a few feet from the audience on either side, and being able to watch those moments when the audience really connects with the material. Also being able to enjoy the show as Shakespeare intended - with a drink in hand!

What’s the moment in the play where the contemporary relevance hits you the most?
In Hamlet's musings on great and small people all meeting the same end. The end of the line for all things and the fear and fascination we all find in it is as relevant today as it was 400 years ago.

Have you ever worked on or been in a production of Hamlet before? Where?
I stage managed Hamlet... A Puppet Epic! with Shakey-Shake and Friends at KidsFringe this past July. We're coming back for Best of KidsFringe at Solar Stage in late April/early May.

What’s your favourite place in Toronto?
The Gladstone Hotel. I got married there in November :)