Click here to buy your tickets to Othello
We asked Jeff Dingle, who plays Roderigo in our production of Othello, a few questions about himself, his character, and the play... 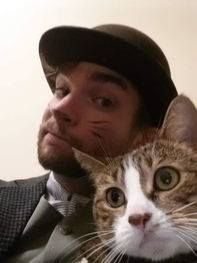 Jeff Dingle as Roderigo. Photo by Jonas Widdifield.
What might people be interested to know about your take on your character?
All I knew walking into this is that I didn't want Roderigo to simply be the "villain's bumbling henchman." What we've discovered is that he is less of an idiot and more of an ignorant man blinded by an unhealthy obsession. This makes him easy to manipulate. What's tragic is that he's always just on the cusp of knowing he's being used, which is also a great source of comedy.

Shakespeare BASH'd is known for their love of karaoke. What's your go-to karaoke song?
I have a habit of requesting either Paradise by the Dashboard Light or Bat out of Hell. I always curse myself once I start singing because both of these songs are over ten minutes long and I always loose my voice.

If your character were at the Monarch Tavern, what drink would they order?
Roderigo would order whatever the cheapest beer on tap is because he gave Iago most of his money.

Othello takes place on the island of Cyprus. What's your dream sunny vacation spot?
I want to soak up some rays on a beach on Jeju island in South Korea with my brother and his family.

What are you most excited for people to see in this production?
I'm very excited for people to see this play because it's going to be so much better than the Stratford production*. Seriously, it looks so bad. Don't go. Come see this one instead. Jeff Dingle is in it.
*The opinions expressed in this interview are those of Jeff Dingle and do not reflect those of Shakespeare BASH'd.
Proudly powered by Weebly