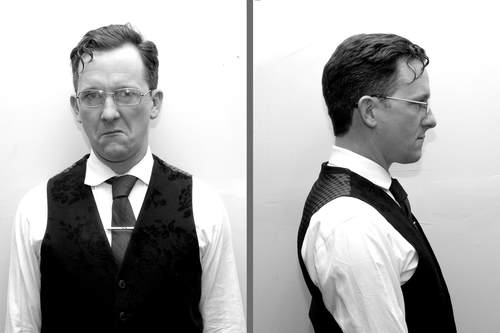 Geoffrey Armour as Angelo. Photo by Kyle Purcell.
What might people be interested to know about your take on your character?
As with any process of mine, I sort of slowly allow the character to reveal themselves to me. I attempt to discover the reasons why they do and say the things they do. I don’t make judgements about whether or not the character is good or evil. I simply to allow them to exist inside of myself. I do my utmost to bring their humanity to life by understanding their psychology and their heart. For Angelo this has been a difficult process in the sense that his strict respect for the law and repressed sexuality ultimately escape from his control and the results are violent and unforgivable. It is hard to find love for a person that wounds another so deeply. I’m conflicted about him. I have decided to let him exist in this conflict.

What’s the best line in the play?
“Alack, When once our grace we have forgot,
nothing goes right: we would and we would not”

Measure for Measure is being performed at a music venue. If you were in a band, what kind of band would it be?
I would be either a one man band like Burt in Marry Poppins specializing in a sort of mix between gothic country and hip hop OR The lead singer in Chum Drum Bedrum.

If your character were at Junction City Music Hall, what drink would they order?
Angelo does not drink. At least not publicly. Nor would he deign to enter such an establishment. But he’s no fun, so don’t be like Angelo, get a drink.

What's your take on prunes? Yes? No? How would you prepare them?
If I have to hear about Pompei’s stupid prunes one more time…I swear I will lose my mind.

Have you been in a Shakespeare BASH’d play before, or is this your first one?
This will be my first performance with BASH’d. I am enamoured with their simplicity and love of the text. They strip the bells and whistles away and leave the actors to their own devices to fill the space. This kind of stark simplicity is remarkably challenging.