Click Here to buy your Tickets to Twelfth Night
We asked Lesley Robertson, who plays Feste in our production of Twelfth Night, a few questions about herself, the play, and her early romances... 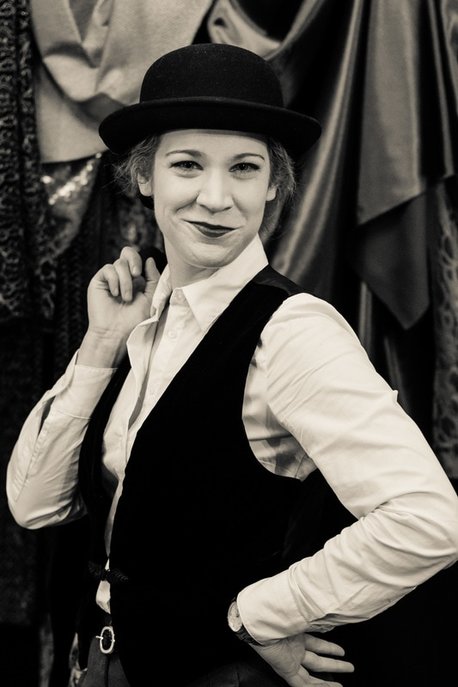 Lesley Robertson as Feste in TWELFTH NIGHT. Photo by Kyle Purcell.
What part of the city do you live in, and what is the best thing about your neighbourhood?
Allan Gardens…there’s not much… “Hooker Harvey’s”?  Nawww…seriously though: the Maple Leaf Gardens Loblaws (because of the cheese wall!)

What is your favourite scene or line in Twelfth Night?
I LOVE when Malvolio reads the letter. LOVE LOVE LOVE!

What’s the best prank you’ve ever pulled (or had pulled on you)?
I hate pranks.

Have you ever written or received a love letter?
I used to write love letters in my youth…I was too shy to talk to boys but I had so many feelings….

Who was your first kiss?
His name was Dan.  He had a nose like Kevin Bacon which I was really into. He ate my face.

What are you most looking forward to about this production?
Singing beautiful songs composed by Franziska Beeler!

What are you going to drink to celebrate opening night at the Monarch Tavern?
First, a cold and hoppy beer (because I’m a beer-girl), but then it’ll be an irresponsible mixture of beer, wine, cocktails and hard liquor with no thoughts to the next day’s suffering.