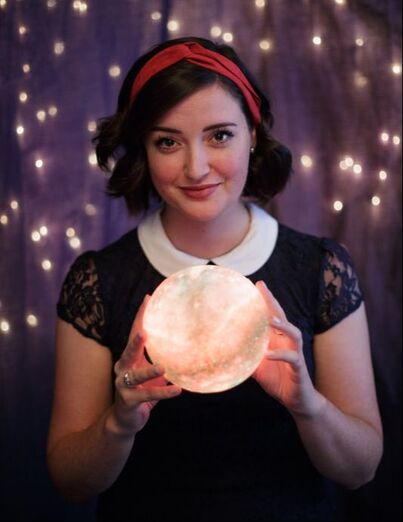 Eliza Martin as Hermia. Photo by Kyle Purcell.
Have you been in a production of A Midsummer Night's Dream before?
I haven’t! My theatre school did two Shakespeare productions in one year and one was Midsummer and the other was the Scottish play. I felt very confident I had specific fairy energy to offer, but was cast in the Scottish play! I had an amazing time mind you, but very thrilled to be finally living out my fairy dreams as Moth (and Hermia is nice too).

What might people be interested to know about your take on your character?
I think there’s some definite Veruca Salt energy in Hermia, and I think her primary personal journey throughout the play is one of independence and growing into her own power as she chases what she wants. The journey I’ll be privately playing in? Girl to kingpin. As the process goes on I’m discovering more and more about Helena and Hermia’s relationship. I believe in many ways that their relationship is actually the  primary relationship amongst the four lovers.

If you were transformed into an animal, what would it be?
It’s hard to say, but I do know this: I would like to believe I would be a predator, but I would most definitely be prey.

If you were in "The Most Lamentable Comedy and Most Cruel Death of Pyramus and Thisbe" which character would you play?
Lion! Especially Snug as the Lion, though. (See the predator/prey revelation above).

If your character were at the Monarch Tavern, what drink would they order?
The Brickworks Peach cider!

Who is your favourite pop-culture fairy?
Tinker Bell! I too, would appreciate if you would applaud.
​
If you could have one magical power what would it be?
Reading books over shoulders in the TTC without be caught. That, or flying.

What is your history with Shakespeare BASH'd?
I worked with Shakespeare BASH’d on their staged reading of The Changeling a few years ago, which gave me the chance to really dig into the text and allow the words to do the work. My favourite comedy however is active, wild and bold and so I am thrilled to be up on my feet in this production and running through magical forests! I’ve most recently been performing solo theatre, so it’s been a joy to be a part of a cast again and have such a wonderful team to play with.
Proudly powered by Weebly