Click here to buy your tickets to As You Like It
We asked Justin Mullen, who plays Orlando in our production of As You Like It, a few questions about himself, his character, and his taste in pro wrestling... 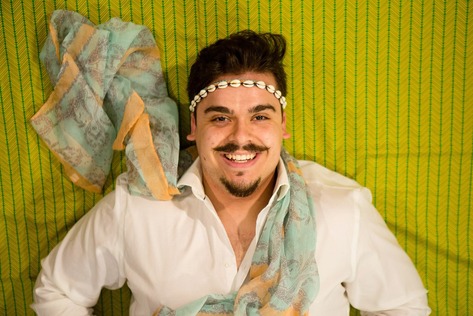 Justin Mullen as Orlando. Photo by Kyle Purcell.
What might people be interested to know about your take on your character?
I think the greatest discoveries have all come from the magic of being in Arden and how that opens every single character up to finding out who they truly are, who they truly love, and what is of true value – a 1960s haven a for peace and love!

What is your favourite forest?
The forests of Algonquin park with out a doubt. There is a trail that can take you to a peak where you can overlook the canopy of trees as far of the eyes can see. It's freakin' awe inspiring.

Who is your favourite pro wrestler?
Nacho Libre, for sure.

Did you ever write love poetry?
Ha! I'm a little embarrassed to say I have. Let's just say Orlando and I share a very similar skill level when it comes to writing love  poetry...you'll see what I mean.
​
If your character were at Junction City Music Hall, what drink would they order?
Probably their cheapest pilsner because Oliver's got all the money...
​
What is your post-show drink of choice?
Any crispy IPA on draught I can get my hands on.

What are you most excited for people to see in this production?
Another hard favourite to choose, but I would have to go with the music. At the first table read, Kaleb and Hilary shared the songs and themes that they had created for the show, and every single person listening was in awe. I even thought to myself "Well if nothing else, people will love the music!" Although, now that we're just a couple weeks out from opening, I think people are going to love the whole damn show! I know I do.
Proudly powered by Weebly